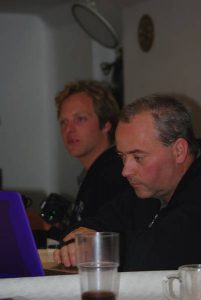 One of the most enthousiastic divers during Expeditie Noordzee 2014, was Gareth Lewis from the U.K. He came to view the wrecks at the British side of the Dogger Bank but dived all the Dutch wrecks as well. Gareth is a biologist by profession and an archeologist in his free time, but surprised us all when he provided us with a nice poem on the last evening of the expedition. Gareth, we hope to see you and hear your lyricks more often the coming years.

All aboard the Commandant Fourcault

The fish net cutting crew ready to begin their assault!

Who is next over the top on this Friesian front line?

Photographers, lights and cameras that choice would be mine.

Because they like the best viz … but they do go a bit slow.

So archaeologists or marine biologists who is next in the scope?

Then come the archaeologists who need lots of room

The fish net brigade next, and yes ‘Rocky Horrors’ of sorts

Cut the nets; fill the bags fuller than full

Derko Mulder too if it was not for his ears

Took over Dive leader duties no problems no fears

As Fred Groen sings the ‘Clean the seas’ shanty song

Navigating, checking where the next super wreck will be felt

You both always come up with the much needed goodies

Night after moonlit night the cam went down

On mud, sand and gravel the Dab’s were in town

Let’s not forget our specialists who, like the birds, flew away

Myrthe who listened in from National Geographic

But no worries as 007 Pim Rhodes came to the rescue

Who is this man, philanthropic and so debonair?

But hydraulic issues they come to us all

But hey, with new pipes on board

Frank can fix it, whilst Gabi masters the loadline of the RIB

Erin knows your number; there will be no damp camera squib

Tom Chef is the best! Amazing soup and Dutch food that is so incredibly grand

Then there is Sous(su), but I’ll call him Kris,

Rineke arrived in style with lots of answers to get

From all of the divers like Joop in his red helmet

The other cuddlier Joep, friendly to all, of course was the dog Doberman

Latin names are second nature for this skillful crew.

Now that I have learned the true meaning of ‘lazing’

Not slouching in chairs, but serious lectures and debating!

Makes the mission seem possible and us all feel fantastic!

This expedition makes me feel proud, that’s the way it is

One person needs the thanks of my children and wife

Not just because he wears the ultimate T-shirt

But dishes them out too and keeps them from dirt

This man is Robertino the reason I stand breathing tonight

Thanks for the nitrox, helium and allowing us to be on the dive site

So as the expedition comes to a glorious end

The ships full of the waiting media tomorrow descend

And perhaps we can all do it again!!!